The Royal Family really know how to throw a Party!  The 2019 Royal Ascot Festival is Five Days of Horse Racing Spectacular Events. 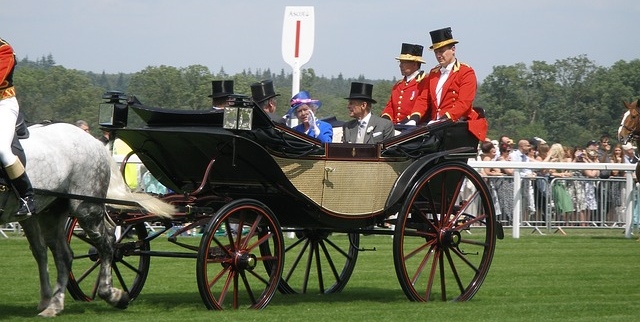 It has been Britain’s Sporting Tradition for over 300-years.  It all started back in 1711, Queen Anne purchased the land near a village called East Cote and the first race was on August 11, 1711.  Handicap Races started in 1791 with the Oatlands Handicap Race.  Since then the Parliament passed a couple of different Acts to ensure the racecourse remains public racecourse.

Ascot Racecourse has gone through several changes and upgrades since, but Queen Anne is still honored by having the first race of the Royal Meet called “The Queen Anne Stakes”.

Now the Royal Ascot Meet is held the third week of June every year which is now known as Royal Week.

The Royal Family arrives in a horse-drawn carriage and rides the strength mile of the racecourse.  Then taken to the Royal Enclosure seating area which a clear view of all the races.  The Duke and Duchess of Cambridge (Prince William and Catherine) and Earl and Countess of Wessex (Prince Edward and Sophie) also attended the Royal Events.

There are four races in this years 2019 Royal Ascot that are part of the Breeders Cup World Championship Challenge Races.

There are six (6) races each day for a total of 30 Royal Ascot Races.  Races start at 2:30 pm BST (British Summer Time) which is 9:30 am EDT, so if want to watch the Royal Festival you will have to get up early.

Royal Ascot Festivals is champagne, strawberries, fine dining, and high fashion.  Speaking of fashion, choosing an Enclosure to view the races will dictate the proper attire to wear. There are four enclosures to choose from, Queen Anne Enclosure, Royal Enclosure, Villiage Enclosure, and the Windsor Enclosure.

If you are not able to attend the Royal Festivals be sure to watch it on NBC Sports check your local listings.

For a complete list of the horses & jockeys that are competing in Wednesday’s Races View Here.

For a complete list of the horses & jockeys that are competing in Thursday’s Races TBA.

For a complete list of the horses & jockeys that are competing in Friday’s Races View Here.

For a complete list of the horses & jockeys that are competing in Saturday’s Races TBA.

Interested in betting on the Royal Races?  You will need a legal online wagering account.  The one that I have always trusted and wagered with many time is TVG.com.

You not only need a place to wager online but you should also know how the British place their bets.  Their rules are different from the US but are just as easy to understand.

For a complete list of Ascot Royal Betting Rules be sure to click here.  The simple Win, Place, and Show do exist but in a different way.  British have a Win, Place means 1st, 2nd, 3rd, or 4th, and Each Way, which means 1st, 2nd, and 3rd place.  Find out what types of bets you can place on the Royal Ascot Here.