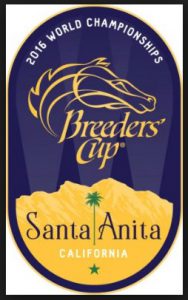 The Breeders’ Cup started as a one-day event back in 1984 and had grown to a two-day event.

The Breeders’ Cup is like the Super Bowl of NFL Football or the World Series of MLB Baseball (Way to Go Chicago Cubs 2016 World Series Champs).

It’s when all the Grade 1 Great Athletes get together and compete for the Championships.

The Breeders’ Cup operated by the Breeders’ Cup Limited Company and held at a different Race Track each year.  Only one time have the races been out of the United States which was in 1996 when it was held at Woodbine Racetrack in Canada.

Are you gone to be one of the lucky people to attend this year’s Breeders’ Cup?

Drink – The official drink of the Breeders’ Cup is called “Down the Stretch” here is how to make it if you aren’t going to be at Santa Anita this year.

Trophy – The winner will receive a replica bronze reproduction trophy of the Torrie Horse.  A trophy is presented to the breeders, trainers, and jockey of each winning horse.  This trophy is an ecorche, showing the muscles of these amazing athletics in detail. On display at the official host track, each year is the largest version of the trophy for attendants to see.

Make sure you get your wager in on your favorite Thoroughbred Horse before it’s too late.

The Breeders’ Cup Races at Santa Anita Park on November 4-5 is fast approaching with $28 million to be paid out in purses and awards.

Here are the schedules for both days.

Friday, November 4th kicks off four Breeders Cup races which include the following:

Saturday, November 5th kicks off nine Breeders Cup races which include the following:

So if there was ever a time to learn how to place Exotic Wagering the Breeders’ Cup races can be very rewarding.  Here are some of 2015 Breeders’ Cup Generous payouts…….

Just to name a few, check out other big payouts from the 2015 Breeders’ Cup!!!