Less than a week to go before the 2018 Pegasus World Cup Invitational race takes place this Saturday, January 27th at Gulfstream Park.  All 12 slots have been filled with odds-on favorite Gun Runner will be making his final start of his impressive career.

Gun Runner who will most likely capture Horse of the Year honors, is the heavy favorite going off at 4/5 odds. Gun Runner drew post # 10 for the big race. Here are the official post positions for each entry along with the early morning line odds.

Live coverage of this historic race begins at 4:30 PM EST on NBC, check your local listings.

The greatest horses in the world will be on hand for the 2018 Pegasus World Cup Invitational. This year’s event will be held once again in sunny Hallandale Beach, Florida at Gulfstream Park. This year’s race will include 12 horses competing for a mind-boggling purse of $16 million. 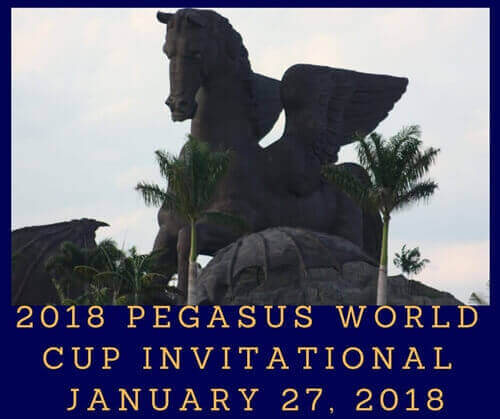 Last year was the Inaugural Pegasus World Cup Invitational race which was held at Gulfstream Park.

The great horse Arrogate ridden by Hall of Fame jockey Mike Smith beat some of the greatest horses on the planet last year which also included California Chrome. Last year the purse was $12 million with Arrogate taking $7 million for the win.

By winning the 2017 Pegasus World Cup, Arrogate took home a whopping $7 million!!!! Shaman Ghost who finished second took home $1,750,000 while third-place finisher Neolithic took home a cool $1 million. Even the 4th through 12th place finishers took home $250,000 each. With a $16 million purse for this years race, there’s going to be some happy people in the winners’ circle that’s for sure.

Get your Tickets and Book your Room Today

If you plan on seeing the Pegasus World Cup Invitational up-close and in person on January 27th, 2018.  Get your tickets now because they will be gone in a flash.

There are over 10 places in and around Gulfstream Park to see this historic event. However, if you cannot be at Gulfstream Park to witness and wager on the big race, you can always join in on the fun and open an online wagering account through TVG.

Stay tuned for future updates as we get closer to the big day in January. The second running of the Pegasus World Cup Invitational race.

Grab your tickets soon, before they sell out.