What Stake Races are happening on The Pegasus World Cup Stakes Day Undercard? Gulfstream Park will host a $400K and (2) $200K Stakes Race on January 28.  The Poseidon Stakes Race is the $400K race that will be run under identical conditions as the Pegasus, at 1-1/8 mile on a dirt track.  This is going to be a huge Thoroughbred Racing Day at Gulfstream Park in Hallandale Beach, Florida.  Here is the line up……. 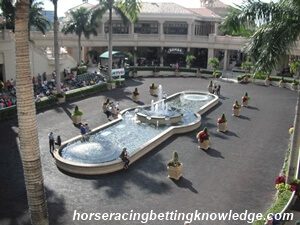 Make sure to visit Gulfstream Park Paddock before each race.

4 years old & up Fillies & Mares run at 5 furlongs on a turf track with a purse of $125K.  This sprint race is just for the ladies to show their stuff.   It will show which Filly or Mare has the speed to win the sprint 5-furlong race.  May the Best Lady Win.

4-year-old & up 5 furlongs on the Turf track with a purse of $125K.  This Sprint Race will include the ladies and guys. Who will be the fastest horse in town this day?  May the Best Horse Win.

Grade 1 for 4-year-old & up with a distance of 1-1/8 mile and will be World’s Richest Purse of $12 Million USD.  The Pegasus World Cup Stakes Day will be the most exciting race in Thoroughbred Horse Racing around the world.

Be a part of Thoroughbred Horse Race History.  Tune in on January 28, 2017, to watch the Richest Thoroughbred Race.  NBC has exclusive United States media rights and will broadcast a 90-minute live telecast of the Pegasus World Cup Invitational from 4:30-6:00 pm EST on the main NBC networks.  Make sure you check your local listings.

The Pegasus World Cup Day coverage will be streamed live on NBCSports.com and NBC Sports app. Which are available on Apple iOS, Android, and select Samsung devices, as well as on Amazon Fire.

For all the NFL football fans out there, don’t worry the race was strategically placed on January 28. The significance here it’s scheduled on the weekend between the NFL’s conference championship games and the Super Bowl.